Anniversary Gifts by Year Guide: Traditional and Modern Gifts for Him & Her 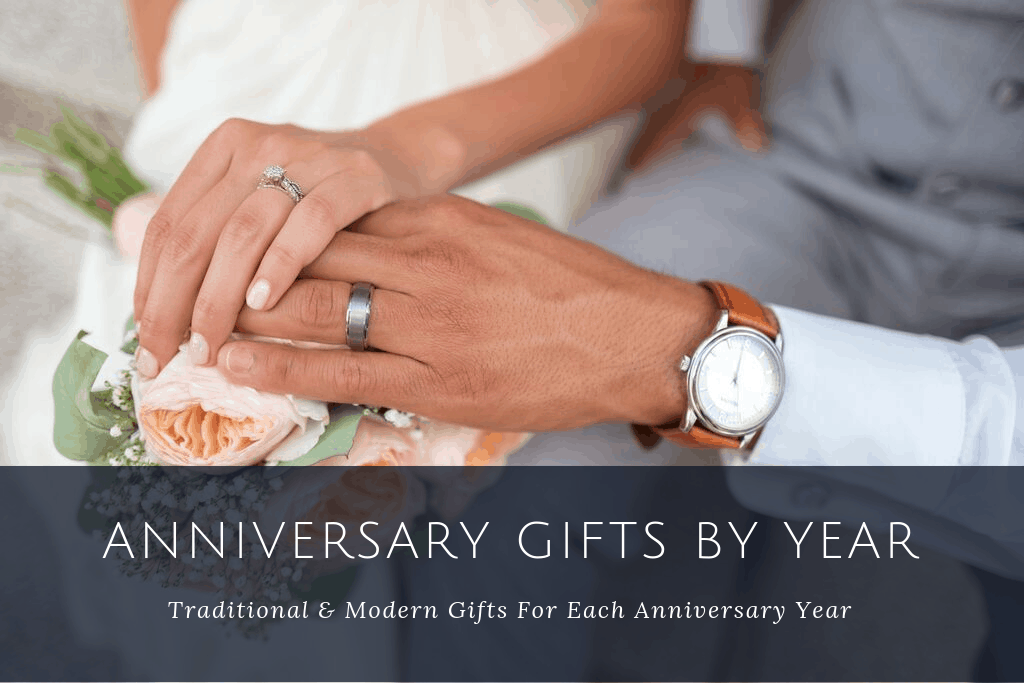 What are the gifts for each anniversary year?

This is a question you probably have to deal with year-by-year. Sometimes it’s fun to go beyond the limits of tradition and get a modern gift. At other times, sticking to a traditional present may be your best choice.

But regardless of whether you want to go for a modern or traditional gift, you still need to know what specific gift to get. The annual dilemma leaves you wishing there was some sort of cheat book that would help your decision on the best anniversary gifts by year.

Our guide is what you’ve been wishing for as it blends tradition with adventure. And it will show you creative ideas for a gift that your significant other would cherish for some milestones of your marriage. First, let’s take a look at the general guideline of traditional and modern anniversary gifts for each year.

Gifts For Your 1st Wedding Anniversary


Fragile yet valuable, paper symbolizes the newness of a young marriage and is the traditional 1st-anniversary gift. The gift would involve something crafted from paper such as a wedding photo book but you can get a bit more creative and gift a custom anniversary canvas print.

If you’re going for modernity, the modern anniversary gifts by year one of marriage is a clock as it represents eternity. So you can gift your lover a watch or an accessory with a clockwork design to remind your spouse you’ll be with them for eternity.

Here are gift ideas to make your anniversary present by year a stellar one:

As you can see in our anniversary gifts by year list, the anniversary gifts for your 10th year are made of aluminum or tin, which represents the strength of your marriage. Though that may not sound glamorous, the good news is, there are many romantic and creative gifts crafted from these silver-tone metals.

Another upside is that the modern 10th wedding anniversary gift is diamond jewelry, which symbolizes how precious your spouse is to you.

China, traditionally used to celebrate the 20th year of marriage represents the fragile and elegant nature of love. But if your spouse is all about modernization, platinum is the theme of modern anniversary gifts for this year. A Platinum present represents the value you have for your lover.

Check out these gift ideas for your 20th anniversary:

Traditionally speaking, pearl is the symbol of 30-year anniversary. Pearls are enduring and do not lose value under pressure just like your relationship after 30 years. For a more modern gift option on this occasion, you can go for diamond. It is the symbol of the eternal flame that fuels your marriage.

Here are some amazing anniversary gifts by this 30th year:


Gold is the traditional and modern 50th wedding anniversary present because it’s a timeless metal. It represents wisdom, courage, and the celebration of a love that has passed through the flame of time.

Amongst anniversary gifts by the 50th year, a unique one would be to engrave your spouse’s favorite picture in a custom canvas print and have romantic gold-colored words written on it.

Here are other gift ideas for Gold:

Picking the right anniversary gifts by year shows your partner the thoughtfulness and consideration you put into getting them a present. All you need to do is follow this guide as your cheat book to get it right year after year. And apart from the gift, you can also make a card with a personal anniversary wish to your partner. Besides, you can refer to our anniversary date ideas to plan for the day.

One thought on “Anniversary Gifts by Year Guide: Traditional and Modern Gifts for Him & Her”