20+ Heartfelt One Year Anniversary Quotes for Someone Special (2020) 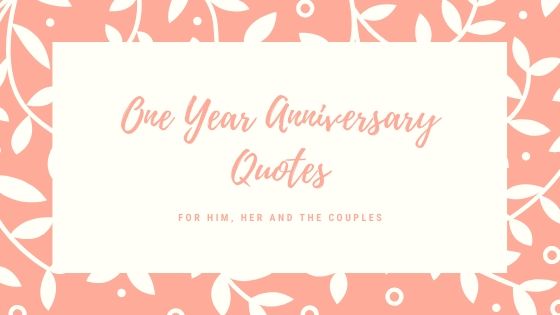 Are you celebrating a one year marriage anniversary? Then you may be looking for one year anniversary quotes to help you find the right words to say.

If you’re wondering what to write in a 1st anniversary card, look no further than our list of 20 ideas for first anniversary quotes.

The first 365 days after a wedding are important, and that love should be celebrated as such. The first anniversary is also known as paper anniversary, so writing beautiful words in a lovely card is a thoughtful and traditional present.

Whether you’re writing to the love of your life or a special couple, we’ve got you covered. Here are 20+ heart-warming quotes to make someone feel special, loved, and celebrated.

Make your her feel special with these romantic and sentimental 1st year anniversary quotes. Write them on an anniversary card so that she can keep them forever to remember your first wedding anniversary.

Make your hubby melt on your first wedding anniversary with these inspirational and heartfelt one year quotes. Make him feel confident that your marriage is strong, passionate, and filled with love and care.

By using these one year anniversary quotes, you can say ‘Happy first anniversary!’ in a meaningful and warm way. Write them in a card to celebrate the paper anniversary 1 year or speak them aloud in a poignant speech.

Remember, celebrating the first anniversary is an important milestone, as it’s the first of many. Make sure your loved ones know how appreciative you are of them.

In case you are wondering what you should gift your other half or the couple on this occasion, feel free to check out our anniversary gift ideas as well.